Yesterday we decided to escape all this house buying and selling business and get out of town for the day, so we went over to the 62nd annual Apple festival in Hendersonville, NC, North Carolina it turns out is the 7th most apple producing state in our nation and most of those apples are grown in the Hendersonville/Henderson county area. This was the first time we've been to the festival, we usually go to the beach around Labor Day but since we're in the midst of all this real estate business we decided to stay home this year.

So off we went across the mountain to the fruit based fete in the little, yet growing, town of Hendersonville. We like Hendersonville's downtown area and luckily that's where the festivities took place so I knew where to go and where to find parking.
Once we got to the big "do" we hit the ground running. 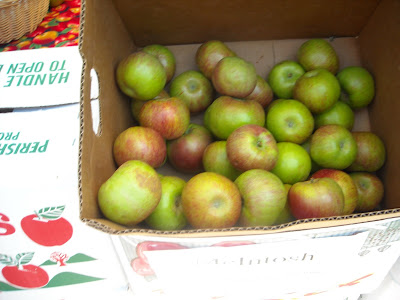 Despite the sunny and mercilessly hot weather the streets were packed with all sorts of people. To my surprise there were many people in the crowd who were openly supporting one Presidential candidate or another. I'll admit I was worried when I saw a slew of people wearing McCain stuff. But my fears calmed down when I saw just as much, if not more Obama stuff being sported by all sorts of people. 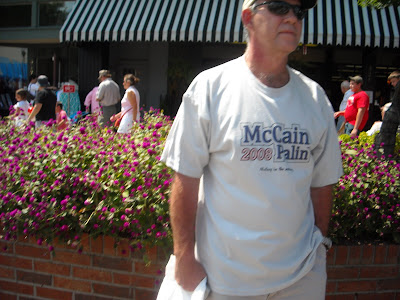 What struck me was that this is what average McCain supporter looked like: 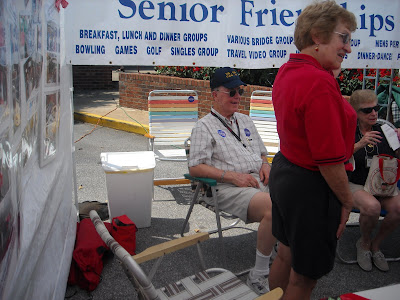 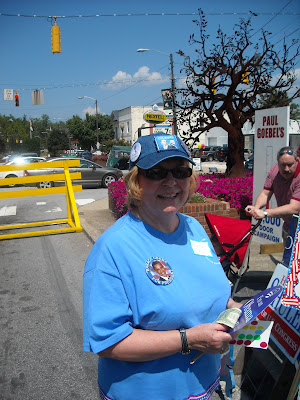 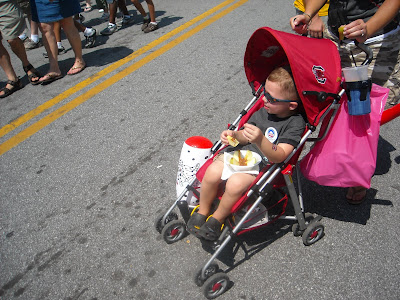 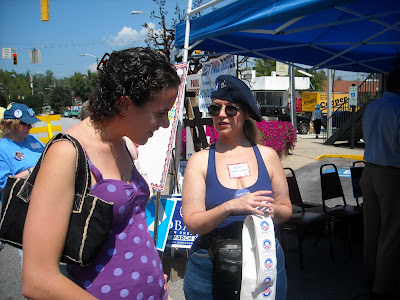 than the Bush McCain supporters did.

Of course Sparky and I slapped on an Obama sticker each and we also bought nifty "Obama '08" bumper stickers as well. And despite her longstanding prohibition against it, Sparky actually had me put one of the bumper stickers on the back bumper of her car later that day. And let me tell you it looks damn good on there.

Sprinkled through out the crowd were some celebrities. Fat Elvis perched under some shade and sang to all of us. 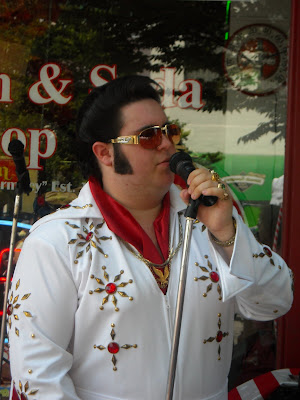 Rudolph the red nose reindeer also showed up but some dumb ass redneck shot him. 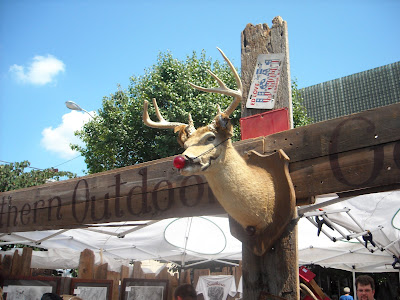 And hypocrite evangelist Billy Graham showed everyone his nudes: 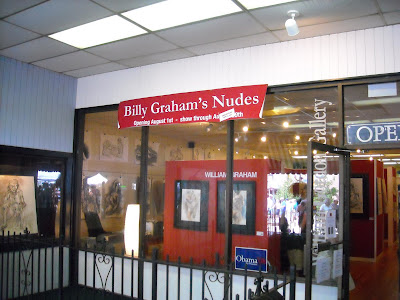 Speaking of Christians, no outdoor festival would be complete without a bunch of those wacky folks spreading their message of love for their fellow man 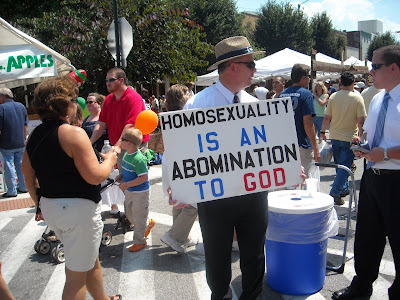 and the good news about the return of Jesus. 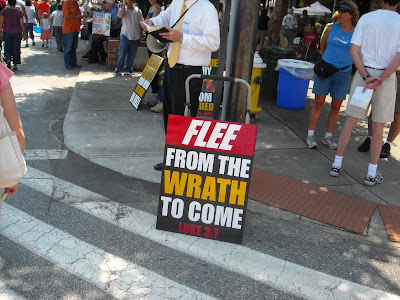 Ah, there's nothing like a good jolt of religious insanity to remind me why I'm an atheist. It made my heart happy to see a gaggle of goth girls ferociously baiting and debating these idiots about what is and what isn't wicked and sinful. You go girls!

There were all kinds of booths set up at the festival. Some were informational, some charitable, but most were filled with people selling everything from hand made crafts to art to food. These gals in the Scandinavian products booth were cute as buttons. 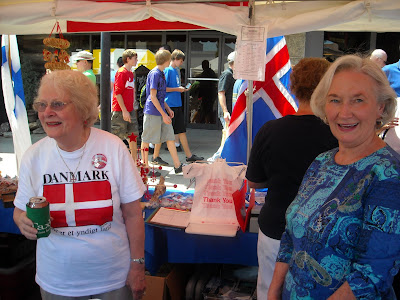 We purchased a few small fish and fishing related prints, we got a print of a rainbow trout for Saprky's dad and I got a small print of some fly fishing flies. Sparky also bought a hand made piece of local pottery. And yes, we also partook of some of the food that was for sale. We tired an apple slushie and some of this crazy gal's fudge. 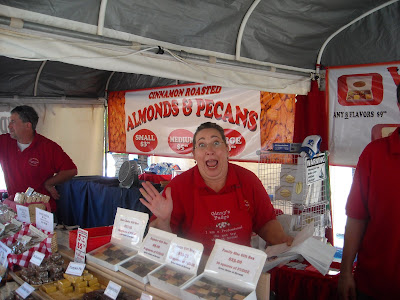 I wish I could say we tried this: 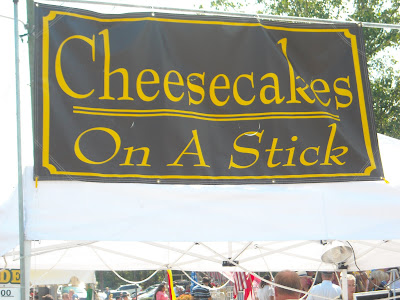 Or had some of this: 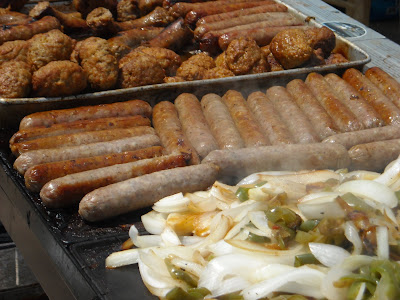 But we had neither and since we didn't I probably won't have to have another coronary bypass for a few more years.
We only hung out for about two hours because the heat was so oppressive but all in all we had a nice time and I'm sure we'll do this festival again some time in the future. And if you want to do it as well it runs through Labor Day. It's held on Labor Day weekend every year so mark your future calendars as well.
And now I'll give the last word on the 2008 Apple festival to this blue GOAT: 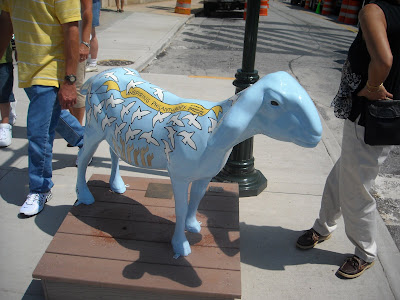 We never seem to get the god kooks out to our festivals! I feel a little ripped off, actually, because damn they make for some fine photo ops.

"God" is an abomination to homosexuality.

You didn't try the cheesecake on a stick? Man!

Do these "protesters" just show up at a festival...out of the blue, just to get attention? Jesus. We'd never see anything like that up here at a farmers market of fall fair or festival. What a bunch of kill-joys! I find that really disturbing, actually, that someone would use a public event that is supposed to be fun and family-oriented and ideally non-political as a platform for such demonstrations.

Did you get any good apple pie?

"Flee from the wrath to come". What happened to god being nice, compassionate and caring?

What a great looking time!! Will be on the lookout for one of those here.

Was talking with pal GI about who we think will win the Prez sweepstakes. Haven't seen many McCain supporters in blogland, but there must be a few out there. Of the two, I'm for the Dems, but am quite concerned for the man's safety.

I laughed my way through this. MathMan kept looking at me like I was a bit punchy.

"Ah, there's nothing like a good jolt of religious insanity to remind me why I'm an atheist. It made my heart happy to see a gaggle of goth girls ferociously baiting and debating these idiots about what is and what isn't wicked and sinful."

Oh boy, how I wish I could have seen that! I am an atheist, through and through, but I have never had the nerve to publicly challenge the fear-and-hatemongers. Maybe I should dress in black...

However, I'm NOT too sheepish to say that it really gets my goat when people (or monkeys) think that just because a goat is blue, that makes him a sheep. I forgive you though, because this is a lovely post and made me feel nostalgic for the County Fairs I used to attend, back in the good old days in California, before it got all covered with asphalt.

I probably had some relatives in that bunch. Fire away, Dr. Monkey!

Apples and psychotic religiosity just don't mix. But then 'round here, the Falun Gong people like to hang around the farmers' market, which is also a funky combination. It's kind of a bummer to be walking away with your Swiss chard and your Mennonite mittens and having to stop and politely look through organ-harvesting photos...

you fairs can beat up our fairs

This post about the apple festival was exciting to read, and gave me a vicarious thrill—I stayed home yesterday.

I love that bit about the goth girls debating the religious zealots. Yay!

Religious nuts at fairs must be a southern thing. Our festival starts later this week - "The Defeat of Jesse James Days". Lots of folks who probably shouldn't be wearing jeans and cowboy boots but no religious freaks.