This week's paraphrased pop culture question on The Onion AV Club blog is:

What movie do you keep quoting lines from even if no one gets the reference but you?

Hands down, no contest, for me it's Repo Man. 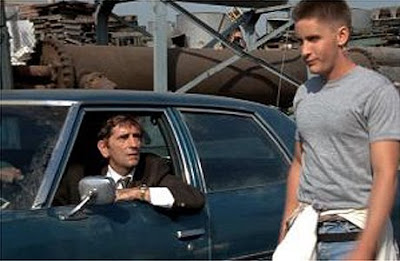 "Credit is a scared trust. You think they got credit in Russia?"

"You read that book I gave you?"
********
I used to quote lines from Pulp Fiction but after it became the approved hipster thing to do, I quit it. Although sometimes I'll let a "Bacon tastes guud. Pork Chops taste guud," slip from my tounge. And "Zed's dead baby, Zed's dead."

Stripes and Caddyshack are also a couple of my go to movies to quote from. "Chicks dig me because I rarely wear underwear," is nothing short of classic. One of the proudest moments of my pop culture life came to me on an overcast day on the golf course a few years ago. I was playing with an older dude who I am sure had never seen Caddyshack and when it started to sprinkle he said, "I guess I better go on in." I looked at him and I said that memorable line first uttered by Bil Murray as Groundskeeper Carl, "Oh, I'd keep playin', the heavy stuff isn't gonna come down till later." He looked at me like I was an idiot and he went in out of the rain. As I finished playing the front nine by myself, I could not help but chuckle at my quotings.

Now, what are your go to movies for quotes?

Posted by Dr. Monkey Von Monkerstein at 12:45 AM

Was it over when the Germans bombed Pearl Harbor? Hell no!

Why, Jonny Ringo, you look like someone just walked over your grave.
-Tombstone

It's the Stay-Puft Marshmellow Man

So, she's a dog.
-Ghostbusters

"You're killin me Smalls!"
Sandlot

"I got two words for you . . Shut the Fuck Up!"
Robert DeNiro, Midnight Run

I am gonna do this one on my blog, but the one line that is always said in our house is oddly enough from Daddy DayCare, I know...sorry, but it is awesome.

It's how the little kid says it to Eddie that is hysterical and what the hubby and I hear in our heads as we giggle like school girls.

Repo Man is one of my all-time favorites. The only movie I quote more than this would be The Big Lebowski. That film is a goldmine of material.

"We a rescue team...not assassins."
-Predator

'Do you know what you have done? You have taken one of the great women on the face of the earth..a woman who loves you and thrown her away...I lost her too but I will get over it cause I am shallow and self centered...but you WON"T...because you are COMPLEX..you will suffer terrible anquish for the rest of you life." -Money Pit

"You want my advice? Get a new president."

It's not a movie, but I always go to The Simpsons for lines to quote.

"No groaning in my store"

"the lesson is, never try."

"Stupid Flanders, you're a genius!"

"Why do we always hurt the ones we hit?"

"Is your hog on drugs? How would you know? How could you tell?"

"You want a Popsicle? How 'bout I shove a pine stick up yo' ass and make you a boy-sicle?

King of quotes is "Raising Arizona."

Local Hero and Shaun of the Dead are my go-to quote movies.

Ironically, I love the eggplant/cantaloupe conversation from "True Romance."

There are so many. Probably the most quoted in my family that noone ever gets is The Quiet Man:

"He'll regret it to his dying day. If ever he lives that long."

"Where'd you leave the bottle?"

"Only an American would have thought of emerald green."

Caddyshack is my family's sacred movie, and the crazy groundskeeper Carl Spackler (Bill Murray)our hero. Two favorite scenes: where demented Carl is riffing on how tight he is with his buddy the Dalai Lama while heedlessly pressing the tines of a pitchfork into the throat of a very nervous lifeguard. "So I said to the Dalai, 'Dalai, how about a little something...you know, for the effort?' He said he didn't have any money, but at the moment of death I would reach total enlightment. So I got THAT going for me...which is nice." In the other scene Carl is pruriently grinding a lawn implement into the soil as he spies on three middle-aged short-skirted women golfers and mumbles madly under his breath..."Come over here, you little monkey woman..." Oh, Murray's the best.

Repo Man is one of my all-time faves, but another is 'Young Frankenstein':

Oh man... too much good stuff!

Wed woses, how womantic.
Oh, it's twue it's twue!

Say hello to my liddle frien

Mrs. Robinson, I think you're trying to seduce me...