First the media cried he couldn't beat Hillary in the primaries and look how that turned out.

Then they wailed he couldn't keep female voters from bolting to Bush McCain, turns out they were mistaken about that too.

Now they're saying that whites won't really vote for him in November. Speaking as a white guy who is whiter than white, in fact I'm almost albino, my only regret is that I can only vote for him once.

I found out early voting here in my county in TN starts Oct. 15th and I'll be there with bells on ready to vote for Obama/Biden.

But enough from me, let's give the last word to our next President of the United States. Say, Sen. Obama, how much of the bilge that the corporate media spews do you think we should believe? 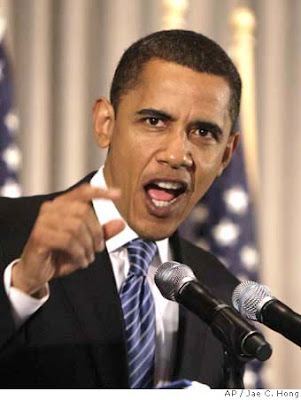 Dang, that much huh. Well, if you say so sir.
Posted by Dr. Monkey Von Monkerstein at 12:21 AM

This middle aged frumpy white chick is not afraid to vote for Obama. But then again, I seem to always fall on the outside of the demographics for just about everything. I like it that way for the most part, but I would prefer to be in the strong majority on this one.

Oh yeah, well senile old men are deserting McCain so it's even.

I'm wondering if I can manage to vote twice. I'll keep you posted.