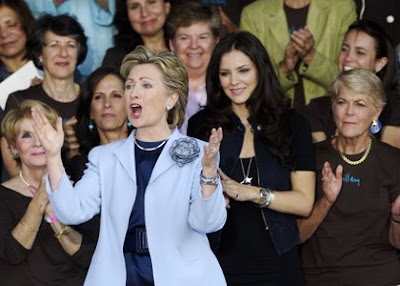 So Hillary won a state primary where she was 30 something points ahead to begin with.  Funny how in a state she was supposed to win, has always led in, and where she pandered to every constituency she could, she only ended up winning by barely 10 percentage points.  Not too impressive if you ask me, in fact if the race had gone on for another week or so in the Keystone state, what the hell is keystone anyway?, Obama would have won it.
So if I were you Hillary supporters, 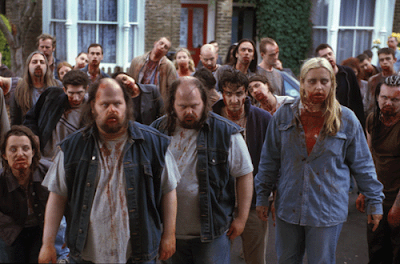 I wouldn't brag about how your woman crushed the mighty Obama ad machine.  She didn't crush it at all she almost got crushed by it instead.  And one more thing supporters of Hillary, you really shouldn't be going around talking about how you think Obama is too weak to go up against Bush McCain in the fall because it only makes you look petty and scared of defeat yourselves.  If your candidate has to resort to the fear based tactics of Bush Rove and Bush McCain to get herself elected, then it only proves our contention that Hillary is not really a Democrat at all, she's Republican lite. 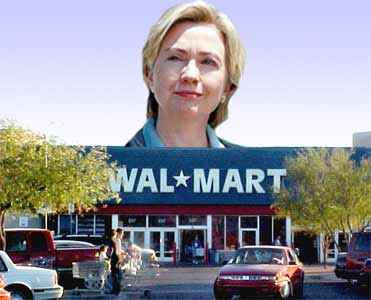 Oh yeah, I nearly forgot, I almost had to pull the car over to the side of the road because I was laughing so hard at Hillary's statement that she will renegotiate NAFTA as soon as she gets into office.  Correct me if I'm wrong but is that the same NAFTA she once supported when her husband was President?  Is it the same NAFTA that has made companies like Wal*Mart so much money?  And didn't she sit on the board of Wal*Mart for years and years as it grew and it ate up small business after small business and it ruined town after town?  Because if I'm wrong then I'd dearly love to have one of you correct me.  Maybe it was a different NAFTA or something.
Or maybe all this goes to show you how she'll say or do anything to get elected.  And that includes knocking MoveOn.org, getting in bed with the guy who was behind the vast right wing conspiracy against her husband, and refusing to go after Bush McCain.
I had my reservations about Hillary but at one time I was prepared to vote for her if she was the nominee.  But then she said that on day one she and Bush McCain would be ready to lead but Obama would only be ready to give another speech.  When I heard that I decided that if she got the nomination then I'm voting for Ralph Nader or Cynthia McKinney.
Posted by Dr. Monkey Von Monkerstein at 1:12 AM

And that includes knocking MoveOn.org, getting in bed with the guy who was behind the vast right wing conspiracy against her husband, and refusing to go after Bush McCain. Exactly!

Obama has said we need to reach out. Hillary says she'll do a reach around.

Yeah, I remember NAFTA, too. You know who else remembers NAFTA? Labor Unions.

Hillary has said that she opposed a great deal of NAFTA when it was being debated within the Clinton administration. There's no evidence or record of that, so she shouldn't have said it, as it only makes her look like she's making things up again. She should have said that the Clinton administration took their best shot given what the could get past Congress, and that some years have past, and that the Agreement definitely needs to be amended to help create better conditions for workers. That way, she and Bill both save face, and it gives her distance from the whole thing. Where are Hillary's advisors in this campaign, BTW? They suck.

Oh and when I read this in your post: "if she got the nomination then I'm voting for Ralph Nader or Cynthia McKinney," it reminded me of all the people who said the same thing in 2000.

what the hell is keystone anyway?

Wow, am I in the first pic or the second? I'll take the first. I'm not really the brain-eating type.

If she gets the nomination I will vote for her because I don't McSame picking our next Supreme Court justices. However when I cast that vote I will be holding my nose so tight that it may bleed.

The longer this election season has gone, the more I realize I just can't support her.

I love Cynthia McKinney and am still pissed off about how that incident at the congressional security checkpoint was misrepresented in the media.

Regarding that photo- it's odd that the people in the parking lot are non-plussed that a giant Hillary is looming over the shopping market.

I'm with PoP on this. She's not my first choice by a long shot (and I'll need a long shot of something to vote for her), but I sure as shit know who is not a choice at all.

Down here we see giant CephaloHillarys skulking about Cracker Consumables all the time. Maybe they haven't immigrated to your state. But if you do see one, just don't talk to it. Just don't.

I will vote for her if she gets the nomination, but I will not put her bumper sticker on my car.

But the only way she can get the nom is by the 100% elitist route -- ignoring the pledged delegates that represent the American people's votes, and twisting the arms of the powerful party members to vote for her against the will of the people.

If anything, Obama ran against the Clinton Machine since she had the backing - and ground support - of PA's Governor, etc.

Plus, McCain has smartly laid off Clinton and begun attacking Obama.

Would you like a little cheese with your whine? Funny how the opening point spread gets bigger and bigger each time an Obama support talks about PA. In a week or so it will be "she started out 50 points ahead" ...

And go ahead and poke fun at older people, but just keep this in mind ... we are kicking Obama's butt ... otherwise he would be able to close the deal! ha

The bottom line is Democrats are not convinced that Obama can win in November. If they WERE, he would have wrapped this up a long time ago.

He's had the full support of the media, he's raising more money than anyone has ever raised for a primary contest, and yet HE CAN'T CLOSE THE DEAL!!!

Now, would you like to try some fresh fruit with your whine?