we live in EAST GERMANY

One of the reasons why I got my scanner was so I could scan and save things like this on the worldwide interwebs forever. I picked this little children's picture book up in a thrift store in Asheville, NC for .50 and it blew me away. 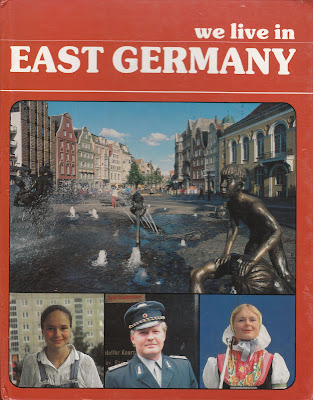 It was published in the UK in 1985 and it's a piece of propaganda genius. It's an alleged look at the lives of some ordinary average East German citizens. They all extol the virtues of living in a Communist country that had to build a wall to keep it's citizens from fleeing to the west. If history is correct, and why wouldn't it be, then about half of the people in this book were informing on their friends, family, and neighbors to the secret police. However I'm inclined to think that 100% of them were Stasi snitches due to the fact that the government had such a tight control over the media in the former DDR and there's no way they would have let a writer talk to anyone who they did not approve of.

This is one of my favorite profiles in the book. It's a profile of a minister who has some odd ideas about religion, though I love her comments about fighting for peace and justice. Click on the picture to read her profile. (For some reason Blogger sucks ass today and you can only click on the second picture to make it bigger, so if you want to read all about this minister you'll have to go to the Flickr link I give below. Sorry.) 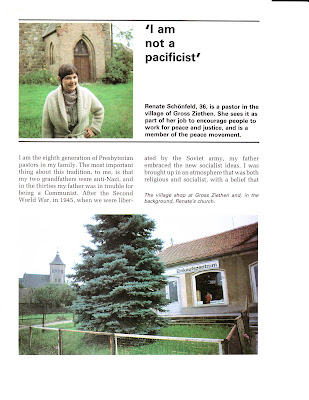 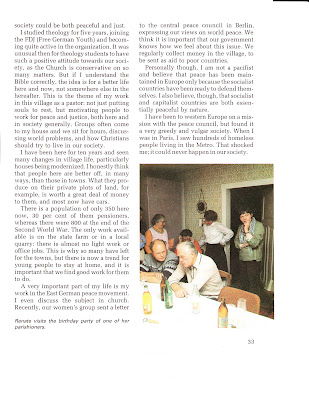 I've posted the rest of the people's profiles on Flickr if you want to see them. My other favorites are the hostel manager who looks like a sex offender, the Socialist rock band leader, and the little gal who is a gymnast. They really are a great snapshot into Cold War propaganda.

(On a weird related note, my blog buddy UberMILF put a link to a Dean Reed song in a comment on my religion post today. Dean Reed, for those of you who are not aware, was a cheesy American singer who was bigger than Elvis in the Soviet Bloc. He lived there for years and years and he died there as well, under mysterious circumstances. I guess great minds must think of East Germany at the same time.)
Posted by Dr. Monkey Von Monkerstein at 10:24 AM

I once watched a show about Russia after the fall of the Soviet Union, and to a man, each "common" person interviewed said they missed the USSR and the "pride" they felt when they'd get together for those military rallies, watch the armies and tanks parade by, and sing patriotic songs. You could see the longing they felt for the good ol' days when they were a superpower to be reckoned with. A friend who studies Russia thinks they'll go back to a Stalinesque government before too much longer, and I have to agree. I can see Putin declaring himself ruler for life and going totally Stalin on his enemies. Scary.

They had all that stuff in a children's book? Wow those communist kids are precocious.

And you prolly already know this, but you have been Boing-Boinged!

Cool - I've always wanted to learn how to be a Heidi Ho.

Dguz-I knew other people besides me dug this stuff.

Barb-They're not only precocious, they're math whizzes too!

Splotchy-Thanks for the heads up. I had no idea I was on there until I got back and saw your comment.

Kristi-You'll always be a Heidi Ho to me sugar booger.

i was in East Germany/East Berlin about 10 months before the wall fell. i remember having all this east german money, which they forced you to change from west german or american -- and having no place to spend it! the museums were free and a cab across town was no more than 50 cents

when you went to a restaurant and ordered everything on the menu was "sold out" so after 2 days in east berlin when i was heading back to west berlin.....i had all this money -- and you couldnt leave with it -- i had to deposit it in an east german bank! needless to say after the wall fell in 1989, i am sure the bank did as well

when i went back to berlin in 2005, rest assured east berlin was now cool and the buildings with the sterile soviet architecture were now million dollar condos

Dcap-You sure are well traveled my friend. I envy you.

And with whom did the esteemed distributorcap see this newly fashioned berlin with?

am i an attention hog or what.

this is a great post monkey, i love it.

I'm American, have been living in East Germany for the past six years, and recently borrowed this book from a co-worker. I found this web site when I was trying to find out more about the book.

Out of curiosity, I googled most of the people to see what had become of them and I was able to find all but three (the electrician, the Sorbian woman, the teenage girl). These are all real people, and many of them had won major awards in the GDR. Lots of these people have their own Wikipedia entries.

If anything, the thing that I was surprised about the most in the book was that the weaver from Plauen mentioned being able to watch western TV - in public. It was pretty well-known that people were watching western TV, but you could get in trouble for admitting it. An acquaintance used to love the show Flipper as a little girl, but her best friend's parents were in the Stasi - one slip-up about Flipper and the whole family could have been in trouble for watching western TV! She has vivid memories of her parents sitting her down before her friend came over, telling her not to mention Flipper or play Flipper!