The only minister to endorse me, Rev. John Shuck, sure as hell made it hard for me to denounce him. After all he's progressive as the day is long, he is further left than me on certain issues, he believes in gay marriage, he attends anti war rallies and protests, he believes in evolution, he started a PFLAG chapter here in the Tri Cities area, and he constantly makes fun of right wing religious nut bags who have sticks up their asses. So you can see why I was having a hard time finding a reason to denounce this perfectly progressive minister. 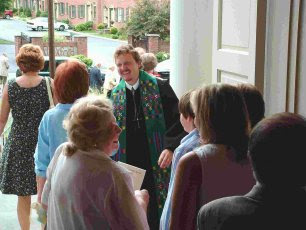 Until last Friday that is.

The dastardly dude refused to attend a get together at his current church secretary's house, and no he does not have a new church secretary because the old one left under a cloud of sexual harassment and it's important that you all know that his old church secretary did not chase him around the church until she caught him by the organ (wink wink, nudge nudge). The get together was in honor of the birthday of the husband of his new church secretary. Sure he spends a lot of time with his secretary, a gal by the name of Snad who happens to be my real life friend and an erstwhile commenter on this blog, and yes he probably sees her husband John, the guy who's birthday we celebrated, a lot too but that's no excuse for blowing off the party.

Oh sure he'll claim he had some "ministering" to do somewhere but I know he was probably at home making new Farting Preacher videos or watching and contributing money to the latest Benny Hinn crusade. The party and Snad and John's place was the perfect place to try to convert Sparky and I, but Shuck shirked his duty by not attending and converting us. He let us remain the godless atheists we are. We'll be sure and curse him as we get anally raped by the hoary minions of Satan for all eternity. It's on your head if we go to hell when we die Mr. Shuck, you had your chance but you blew it.

But just so we understand each other here, I'm only denouncing you, I'm not rebuking or repudiating you. And I most certainly am not rebounding, resounding, revolving, revolting, reupholstering, or sugar coating you. And I may even be persuaded to retract my denouncement of you if you see fit to grease my sweaty little monkey paw with some cold hard cash. I'm just saying, that's all.
Posted by Dr. Monkey Von Monkerstein at 12:18 AM

Yep, Shuck is surely doing all the right things. I don't trust anybody selling religion and that includes 99.999 percent of all religious leaders. What gets me is How Does He Do It (and get away with it)? There is where his genius lies and I want to know more. Go Well,

I guess you'll have a pretty easy time supporting your claim that you weren't actually in church to hear his fiery anti-simian sermons.

I have to agree with this denouncement. A party just isn't a party without a progressive preacher!

I think that you have to upholster someone before you can reupholster them...

Shamed I am. There is a reason people should be squeamish about inviting preachers to parties. It goes like this:

"Oh crap! The preacher is coming! Hide the beer...

Wow, just denouncing, no rebuking, or any of that other good "re-" stuff? Are you losing your edge? :)

I had a fridge full of the stuff!! I was ready!!! Except that I couldn't find any of that great Trappist Monk ale. This is, after all, NE Tennessee! Ah well, maybe next year...sigh

Why shouldn't you ever go fishing with just one Mormon? Because s/he will drink all the beer!