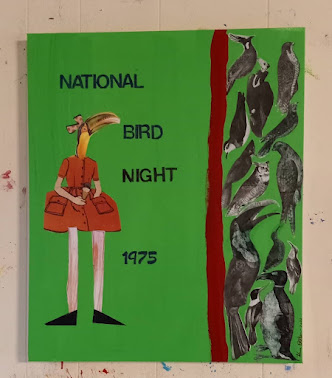 In 1975 white America was beginning to find out what black folks always knew, that the USA was still segregated as hell. This piece is all about that. Ask any white person you know if they know what 'redlining' is and most can't tell you.  Banks literally took a map of a city or county and drew red lines around areas they didn't want black folks living in. Home loans were declined to black folks because white folks feared them and feared they would bring down property values.

Notice how the black(ish) birds are cooped up behind the redline while the 'virginal' innocent 'normal' whiteish bird has plenty of room to grow and get access to good schools and a better life since property taxes pay for schools in all areas, those in neighborhoods with better housing got better schools and more, while at the same time black kids were expected to do as well academically as white kids despite having virtually no school funding and trigger happy cops ran wild to enforce laws that protected the institutionally racist system. Bankers and mortgage company owners exchanged Klan robes for business suits. And the sad thing is it hasn't changed much since 1975.