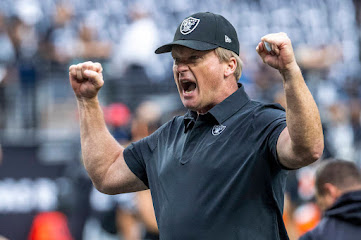 Jon Gruden may be gone but there are hundreds more racist, misogynistic, homophobes like him still in all levels of sport.

And speaking of sports, when I was young I was baseball crazy and I loved football too. But after my mom was killed on an operating table and I was forced to go live with my crazy ass bi polar aunt, her husband who lived to humiliate any male he saw as a threat to his dominance, and their bullying children, I found out they all hated sports, especially my cousin John.

He despised football and would loudly proclaim it every chance he got. He belittled me for liking it and still in to adulthood he hated it and bizarrely, he held me personally responsible for every bad thing associated with it, as if I had some kind of power over others and since I was a fan I MUST think and act like all other football fans everywhere. If I was watching a game in our adolescence and he wanted to watch something else, or merely wanted me to stop enjoying something I liked, he'd tell his crazy ass mother and she would threaten to hit me with a belt or some other weapon to get me to stop watching. He chose to make my life more miserable time after time growing up. And she backed him up. Every time.

Of course he will deny all this and try to spin it as if his bullying was my fault, but that's what gas lighters do. I'll bet he indulged his own kid's interest in sports and never gave a second thought on how he purposely made my life harder when I was already having a hard time with all the bullying I had to endure.

Now I'm a grown man with no contact with him and a home of my own and I have Hulu with live TV expressly so I can watch sports. Sparky isn't a fan of football but she leaves me be while I watch and enjoy because watching sports was a bonding thing between me and her late dad.

And I know he reads my blog so John, go fuck yourself you bullying piece of shit.