Rev. Pat Robertson on the earthquake in Chile 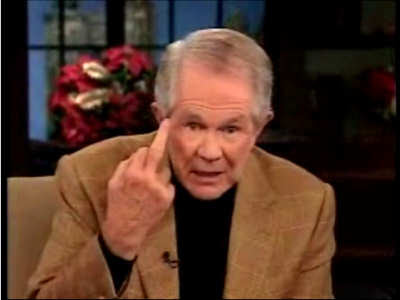 Leader of the Christians, Pat Robertson, today released the following statement of blame for the massive earthquake in Chile:

"True story, in 1973 Chile elected a Communist to lead their government. The earthquake was punishment for that. God hates Communism. Also he is punishing Chile for electing a woman president, for not making their citizens speak English, and for having a country named after a food. And the queers too. The queers in Chile brought this on their country. Every time a hot young full breasted woman kissed another hot young full breasted woman right on the lips while their tongues snaked around each other and their heaving bosoms heaved while their soft hands caressed each other...hang on...what was I saying? Hmmmmm. Oh yes, this was all brought on by men having butt sex with other men. And the Commies. Yeah, that's it. Jesus hates that stuff."
Posted by Dr. Monkey Von Monkerstein at 12:29 PM

So he's toning it down

Haha!
Are you sure that you didn't fix that statement up a bit for him? LOL

You lost me after hot young full breasted woman...

You had me at "hot young full breasted woman".

He is so wise.

If I were a religious man, I would thank God every day that I am not going to the same eternal thingy place as this slime. Oh, wait, it's tongue-in-cheek? Doesn't matter. I stand by my statement.

i know nobody can be that stupid or evil to say something like what you have blogged here.
i'm glad you are having a good time and rating by making fun of other people's suffering.
yes, i am chilean and you should be ashame for making such a piece of crap of yourself.
if you could only use your brain for something productive.

Congrats on this excellent satire getting linked by PZ Myers (Pharyngula)!

I suddenly wish I had a great big bushy beard so I could fit in.

Worl trade center was destroyed by jesus, because USA people are stupid like you, and god hates stupid people.