I'm disappointed beyond words in the Obama administration for the following reasons:
and they blow off the tops of them with explosives and they remove all the coal. What's left is this: 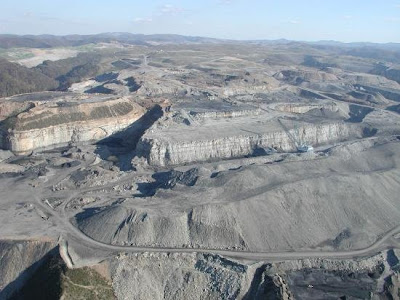 This type of mining ruins not only the mountain range, it pollutes the water all around the mountain, the chemicals used in and brought up as a result of the mining infect the area in and around the mines, and it devastates the land and the people who live on it, it makes the land uninhabitable and unusable. The water that used to be absorbed by the tree and plants now runs off the barren mountains and into huge holding ponds that are filled with a toxic sludge that is made up of rock dust, coal dust, and chemicals like arsenic and mercury. And that sludge seeps into the ground water and it then flows and contaminates ground water in surrounding communities. So, unless you're an idiot, you can see why this practice of mountain top removal coal mining is short sighted, hideously wrong, and needs to be stopped.

I may be wrong but I think candidate Obama said he'd stop doing these things if we elected him President. Well sir, we did what you asked, so it's time you did what you promised you do. And if you don't, then you're driving me and others like me into the arms of real progressive candidates who will do something about these injustices. I didn't vote for you to become my President just so you could act like a god damned Republican.
Posted by Dr. Monkey Von Monkerstein at 10:05 AM

I hear ya honey and I'm sorry. I think polluting the environment, discriminating against others, and continuing the war and all it's secrets are damn good reasons to be mad. If the democrats are going to be 'republican lite" than we need a new party.

At the very least we're getting more Clinton era triangulation out of Obama. The last thing this country needs is more watered down right wing policy be it in the environmental, women's health or national defense arena.

I don't give a shit that the right wing is screaming bloody murder at every little thing he does. Stop listening to those lunatics. They're never going to like you anyway.

This can only what I expected, but less so than if someone else had been elected, really. The reasons you mention are EXACTLY why we should have impeached Bush/Cheney while they were still in office - to remove the extreme powers they gave the President - not just themselves, but all Presidents to come.

Give him time, Monkey. All in all, I think he is taking a more measured and reasonable approach to things than even H. Clinton would have, and certainly more so than Old Fart and The PIce Queen would have.

This is just showing us that, party affiliation notwithstanding. we need to hold our leaders' toes to the fire, and let them know what we think. Keep those cards and letters coming, folks!

Those before and after pictures made me want to cry. WTH Obama?!

Welcome to my world.

I was so delighted to see the end of Bush/Cheney.

I don't feel scared to walk the streets anymore now that Chimpy's gone, but Obama is just continuing a lot of Chimpy/Cheney bullshit--so what's the difference?

The only way things might've changed is if Kucinich had been elected. Which would never happen.

Ooh, that last one burns my biscuits something fierce. I recently saw a documentary called Burning The Future: Coal in America focusing on the physical and environmental harm of this practice, specifically in West Virginia. Enlightening and tragic.

Was it "Waking Ned Devine" where they had to think up something nice to say about the guy in the casket, but all they could think of was "His brother was worse"?

I give up. Whatever business wants, business gets......

But I was saying these things back in the primary and everyone and his brother was piling on me for talking about third parties.

Remember this anger and use it.

Lately Obama's been disappointing me, too.
I'm just hoping he's doing all this right-wing crap to cushion himself for when the Justice Department indicts the entire Bush administration.
He'd better.