Blame it on Pong

I admit it, I have a misspent youth. I was one of those teens who, when I could escape from the farm in Lee County, hung out in pool halls and played pool, pinball, and video games whenever I could. I played all the games I could afford on my meager wages, we all were made to get summer jobs as soon as we turned 13 and we had to turn over most of our paychecks, and our tiny income tax refunds, to Aunt Rageaholic so she could spend it to keep a roof over our heads, which of course I found out later was a crock of shit because she is just one of those people who were scarred by living through the Great Depression so badly that she has a pathological fear of being broke so she took all the money she could from our earnings until we turned 18. But enough about her, let's get back to my favorite subject, me.

From the second I first saw Pong, for those of you who are unfamiliar with the history of video games it was the first home game system, I was hooked on video games. I came from a big family, including me there were five of us kids born to my Mom and Dad, and from the get go we all played games and learned to be competitive. When we were packed off to live with my Aunt and Uncle, they had four kids and three foster kids to boot so that made 11 kids all together, my sister Linda had died before we moved in with Aunt Rageaholic and Uncle Adultery, so you can imagine how much more competitive we all became. We all wanted to win at Monopoly, rummy, Masterpiece, whatever. When Pong was introduced in the early 70's I wanted one so bad I could taste it. I knew I'd kick some serious ass if I had it and all the other kids in the house would bow down to me when I whipped them at Pong. Alas, it was never to be because we never got one no matter how much I whined and begged.
But my love for the nascent video games of that era never died and one day during the county fair in Lee County, Virginia I got to play Space Invaders. Oh my god, it was heaven to me. Blasting those little invaders as they got closer and closer and that mechanical heartbeat sound the machine made got faster and faster the more levels you went through. I poured quarter after quarter into that machine over the next few days. I was well and truly hooked.
When I got to college I had a little cash every month from my jobs on campus and I was able to draw my late father's Social Security, that was before St. Ronald Fucking Reagan cut all that out, so in between buying copies of National Lampoon and Rolling Stone, cases of cheap beer, ounces of wacky weed for $40 bucks a pop, Pony brand sneakers, polo shirts that had little alligators on them, and Levi's jeans, I played more video games. I played them all. Pac Man, Ms. Pac Man, Gorf, Galaga, Zaxxon, those shitty martial arts games, Q Bert, you name it I played it. I was not great on them but some of them I got pretty good at. Playing them helped calm my competitiveness.
After college I kept on playing arcade video games up until a few years ago. I used them as a way to deal with my frustrations about where I was in life and I loved to take out my aggressions on some fighting game rather than take it out on a real person who might kick my ass. I also used them, just like I used wacky weed and heavy drinking for a time, to make me forget that I wasn't doing well with the ladies. But thankfully I stopped smoking weed and drinking to excess, I met Sparky, and I finally started working grown up jobs that made me some decent money.
But every now and again when I started going on the road selling for Myers Tire Supply and later for that last company I worked for who shall remain nameless, I'd stop at an arcade in whatever city I'd find myself in and I'd play a few games on my lunch break or I'd stop in one at the end of the day if I was out of town and I'd play some for a bit before I went to whatever cheap motel I was staying in that night. I still loved the feel of the joystick in my hand and the thrill of competing against all the other people who had played that machine and against the machine itself, but I didn't invest nearly the money or the time in them like I did when I was in college.
And no matter how much I played them I was never as bad as the guys in this film: 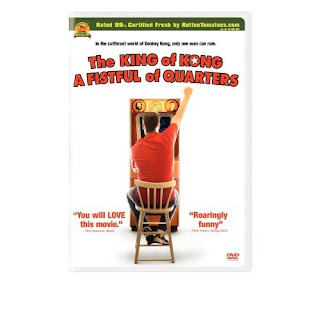 We finally saw The King of Kong: A Fistful of Quarters last night. I had heard about how good it was and I read about how much Chris and Kristi loved it, so I couldn't wait to see it. When I picked it out at the video store Sparky was not too thrilled about it, she thought it was going to suck but I told her to hang loose and to give it a try. When I put it in the DVD player last night she said, "I'll probably fall asleep, so don't mind me," and she laid down on the couch and snuggled under her favorite couch blanket.
But much to her surprise she was hooked from the first minute. And she knew nothing about the world of arcade video games before she had seen this film.
This movie is wildly good. It's all about the rivalry between two guys who both want to have the world record high score on Donkey Kong. One guy held the record for many years and he thought he ws invincible, the other guy is a nice guy who just happened to have an affinity for this video game. They "clash" as they try to out do one another in their race to be the top Donkey Kong player in the world. To them this shit is life or death and to us the viewer it's sometimes funny and painful to watch them go about their business of trying to best one another.
You take sides quickly and when the official video game world does their best to try to cheat the upstart you can't help but get pissed. It's easy to watch all the gamers in the movie and write them off as nerds but that's selling them a bit short. They're just like any other group of people who compete, like baseball players, or politicians, or wrestlers, their field of competition just happens to be arcade style video games. I felt alot of empathy towards them and I could easily see how they got so wrapped up in it.
You'll enjoy this documentary even if you never played a video game in your life, but if you have, then you'll enjoy it even more. I highly recommend it.
And for the record, I never got passed the fifth screen on Donkey Kong. And I never got a perfect score on Pac Man either. But I did finish all levels on this game a few times: 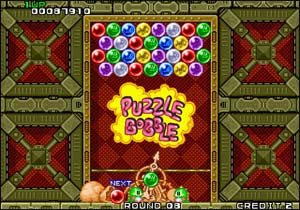 I loved King of Kong!!! So glad you enjoyed it! Who would have thought that a documentary about arcade games would be so fascinating. And oh how I wanted to chop off that guy's mullet...

There's talk that they may adapt this as an acted dramatic piece. I don't think it would be as good as the doc.

Although I never play video games anymore, I was the Xaxon king at the local 7-11 in my youth.

I certainly enjoyed, and enjoy, my video games, and I would try to beat previous personal bests, but those guys are beyond hardcore.

oh my gosh, this post brings back so many memories. i grew up in the era of pinball machines before video games hit the scene. i loved to go to the bowling alley and spend some of my hard earned babysitting money on pinball. then came galaga. i could sit hypnotized for hours playing that.

i don't have an Xbox, playstation or any other gaming device now, but i can sit for hours killing time playing bejeweled on yahoo games.

Remember how Slim was saving for a PSP? Well, that plan has flown out the window now that Grandpa bought himself a Wii. Freaking five, seven hundred dollars by the time he finished paying for the add-ons. And what was the game I saw Slim playing yesterday? Pong. Oh, the graphics were flashier and it had a different name, but it was still Pong.

Yup, I played a lot in my youth. But didn't really get hooked into things like Moon Patrol, Joust and other later arcade games.

It's a matter of pride for those of us who take our procrastination seriously. Video games are just like using steroids - we consider it cheating.

I loved Pong! We used to play on my Dad's Commador Vic-20 computer.

I'm so glad you liked it. My favorite part was when Billy's right hand man was going around the arcade saying, "Donkey Kong kill screen coming up if you're interested." You know those geeks were interested in seeing it, but you couldn't see their expressions because they were too engrossed in their current game of choice. That's some funny shit.

Karen-I wanted to chop off his tie and then his sneering tongue.

Chris-How much would a dramatic version of this suck? A ton.

Dr. Z-I was never the king of it but I played the hell out of it.

Barbie-I remember when the bowling alley was one of the few places to have pinball and video games.

Kirby-I'm reminded I'm playing just a flashier Pong every time I turn on Outlaw Tennis on the X Box.

GKL-Yeah, that kill screen shit cracked me up.